Home » Why We May Not Get Anymore NieR

Why We May Not Get Anymore NieR


A recent post by NieR creative director Yoko Taro has stated that the franchise looks to be finished, at least for now.

Why We May Not Get Anymore NieR

The NieR franchise has been an iconic series, not only gaining a remaster recently for NieR Replicant but also crossovers with games such as a Final Fantasy XIV raid, and mobile title SinoAlice which got a NieR Automata crossover, not forgetting the mobile entry NieR Reincarnation. Most recently even Yoko Taro’s latest card tabletop RPG titled Voice of Cards: The Isle Dragon Roars got a small collaboration by gaining card backs based on NieR Replicant and more.

The most recent remaster NieR Replicant ver.1.22474487139… gained a huge milestone, surpassing one million in shipments and digital sales last June. The NieR Replicant remaster brought the prequel to Automata to PS4, Xbox One and PC worldwide in April of this year. Not only with upgraded graphics but a new dungeon, and DLC as well as reworked combat. There was even the addition of Automata costumes and weapons for NieR fans to enjoy.

But as for if we’ll see another entry following the world of NieR? Well, it’s looking very unlikely. Recently Taro shared on Twitter that the NieR story was now “finished” but joked that if there was a “pile of money” thrown his way, he might work on another game in the NieR universe.

The message summed up the year, highlighting their experience of releasing the NieR Replicant remaster during a very unusual year, especially with the pandemic, and plans for 2022. While a world NieR tour was cancelled, Okabe explained they still want a chance to meet fans. 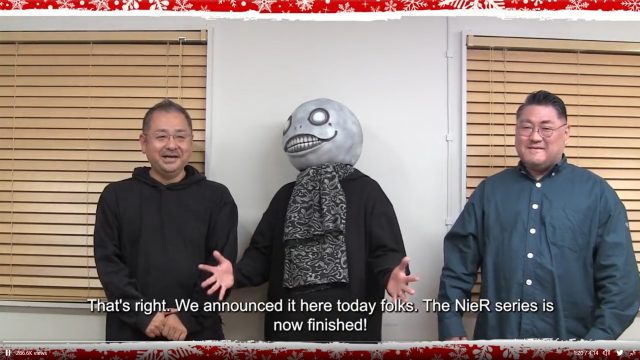 In an end of year message from the NieR trio, they confirmed the series has now “finished”.

The video featured the dynamic trio NieR creative director Yoko Taro, producer Yosuke Saito and composer Keiichi Okabe. They were even asked if there was anything relating to the NieR series being worked on, which gained the reply of a flat out “Nah, nothing!” This didn’t stop the team from cracking jokes about hidden messages in the video.

The release of the remaster Replicant was an ode to fans, but a fresh take on a NieR game looked like it was possible they might be opening the door to another game in the works for the NieR series. Remasters or remakes often bring new and old fans alike to the series, helping to attract attention for another entry, just look at the recent Alan Wake remaster and then this year’s reveal of Alan Wake 2 being in development. But according to this latest message from the NieR team, it’s not happening.

Although rumours have been floating around for years of whether there would be Drakengard 4, the series which acts as a prequel of sorts to NieR. Maybe a remake or remaster? I could definitely see further crossovers with other games as well, even if it’s as comical as the 2B skin for Fall Guys.

If you haven’t checked out the remaster be sure to read our Nier Replicant Review Impressions: Is The Nier Remaster Worth It? Should You Buy Nier Replicant V 1.22? It covers everything you need to know about the upgrade 4k resolution, gameplay, replayability and more. Also playing it myself this year for the first time, it’s an enjoyable experience (well as much as NieR can be with its post-apocalyptic nature) especially for those who may have also played NieR: Automata. In July this year Automata also gained improvements for framerate, UI textures and more for Steam.

Rate this post
(Visited 1 times, 1 visits today)
Previous ArticleBitburner is an idle game about hacking that teaches real JavaScript
Next ArticleForget your gaming PC, XPG wants to stick an SSD inside your mouse