Home » Scourge of the Underkind – Upcoming Chaos Engine inspired shooter for the Commodore Amiga looks better than ever in this new gameplay footage!

Scourge of the Underkind – Upcoming Chaos Engine inspired shooter for the Commodore Amiga looks better than ever in this new gameplay footage! 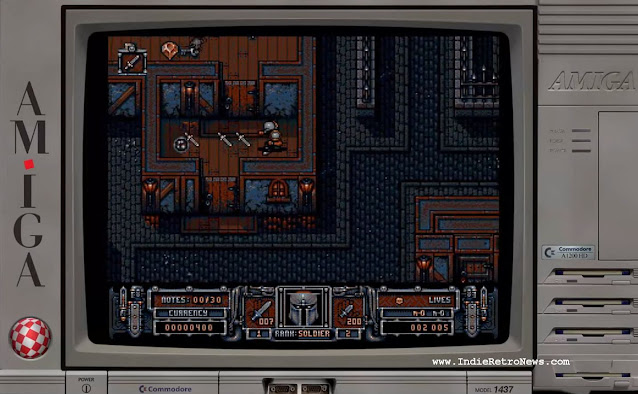 During 2016 and into 2017 Wayne Ashworth and Magnus had been developing a new game called ‘ Scourge of the Underkind ‘ for 1 Meg OCS Amiga’s and above. It was shown off many times as a rather wicked looking top down arcade action game with coin and key collection that is very similar to that classic game Chaos Engine. Well after a number of developments that have been noted via the Commodore Amiga Facebook group, Wayne Ashworth has teased a new video of the upcoming game which shows the first 13 minutes of gameplay footage including the loading screen and intro.

Video Link (Make sure to read the video description)

As you can see by the footage above Scourge of the Underkind has certainly come along way from its very first tease. As at first all that was shown was a short clip and lots and lots of coin and key collecting without so much as a UI. But now fast forward to today and not only have they added a loading screen, but new enemies and traps, weather effects, randomized treasure chest drops, end of key locations, rare treasure scrolls, enhanced screens and shop features, destructible walls and much much more you’ll just have to watch the video to see for yourselves! – Thanks Saberman for the heads up!

Rate this post
(Visited 2 times, 1 visits today)
Previous ArticleWhat are the Pre-Order Bonuses for Horizon: Forbidden West?
Next ArticleWhat video games are you playing over Christmas?