Home » PS5 RPG Remake in Development According to Job Listings

PS5 RPG Remake in Development According to Job Listings


A RPG PS5 Remake is apparently in development, described as “high-end” according to recently sighted job listings.

PS5 RPG Remake in Development According to Job Listings

Developer Mutan Insight, behind the likes of the Blue Reflection series and Final Fantasy XV DLC content Episode Ardyn, Atelier series and more, has posted new jobs listings that have caught the internet’s attention. As reported by Gematsu, the job description describes positions for a “high-end-RPG (remake/title private) for Playstation 5”. 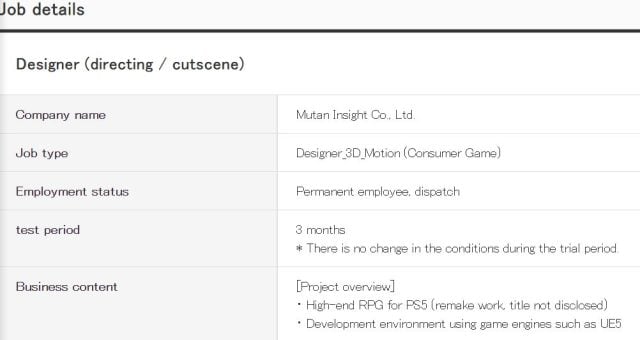 As for what this mystery title is, well there are no hints or details. The only info we know are the positions Mutan is hiring for which include 3D motion designer, 3D art director, 3D background designer, and 2D character designer. Another piece of info is that the game is being developed using Unreal Engine 5, which is the same engine Square Enix is using to develop Dragon Quest 12. If you haven’t checked out Unreal Engine 5’s capabilities you can see it demoed running on PS5 here. It’s also being used to develop Black Myth Wukong which shows some very stunning visuals.

As the company has ties with Square Enix, working previously on FF15 content, and Square Enix’s work with Unreal Engine 5, this could very well be a partnership of some kind when looking at their past experience working together. Square Enix has also had Playstation 5 exclusivity with Forspoken and the Final Fantasy 7 Remake when it was first released (now also available on PC via Epic). Another recent rumour is that a Chrono Cross remake was happening, Square’s 1999 RPG set in the same universe as Chrono Trigger according to Gematsu. The development team has also worked on the Persona Q2 New Cinema Labyrinth in the past, so a team-up with SEGA could also be a possibility. But there is no confirmation on exactly what the studio is working on at this moment.

The fact that it is listed as a “remake” also means whatever game is being developed for PS5, will not only receive an upgrade in graphics but a possible reworking of gameplay, systems, combat and more. It will be exciting to find out exactly what Mutan Insight has its hands on.

In the meantime check out what’s coming in 2022 with our RPG Games 2022: The Best And Most Anticipated.

For more news find it here in Monster Hunter Rise PC Shows Off Kamura Armor In 4K and Expeditions Rome Gets New Trailer Featuring The Soundtrack.

Rate this post
(Visited 2 times, 1 visits today)
Previous ArticleAccessibility was more visible than ever in 2021, but not always in a way that's helpful
Next ArticleStardew Valley may get more updates: “there’s always room for improvement”