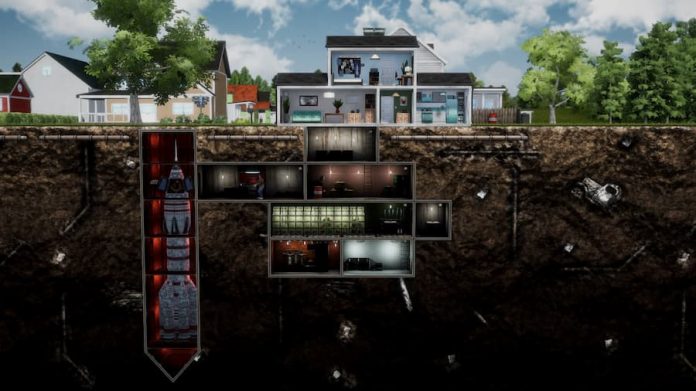 Mr Prepper sees you building a space rocket to blast your way out of a nightmarish Mega-MAGA world.

You read that right. You might think a lot of “prepper” types would vote for Mr Prepper’s fascist definitely-not-Donald-Trump president, but your protagonist is absolutely intent on getting out of Dodge, even if it means blasting himself into space.

That’s your end-game, anyway. Despite the prospect of a deranged leader triggering a nuclear war, it doesn’t have quite the same weight as This War of Mine, though it does resemble a mash-up of that title and the more tongue-in-cheek Fallout Shelter.

There’s a lot of crafting and trading involved, as you might well suspect, but seeing your under-house complex expand, and becoming (mostly) self-sufficient is fun. You’ve only got yourself to look out for so, though this probably makes me a sound like a monster, you’re not left to decide which people are “dead weight”.

And yes, it’s slightly silly, but being able to shove a whole crafting workbench in my pocket gave me a chuckle. But hang on,” you might be thinking, “crafting is a soul-crushingly tedious pastime.” I’ve been known to balk at games that employ crafting but in Mr Prepper, the crafting is the game so it’s not yanking you away from a more entertaining activity.

If you do hate crafting with every fibre of your being, Mr Prepper isn’t going to make you a convert. But it does sweeten matters by introducing the “secret” police, who send an agent to your door to check you’re not in possession of contraband. Building a bunker right under their noses is a real rush, as is running around like a headless chicken, trying to remember if you’ve got anything lying around the house that might get you into trouble.

I would have loved to be able to control my character with the thumbstick; instead, you need to click to send him to destination, which feels a little unwieldy. I’m also not 100%, er, on board, with the idea of jumping into a rocket; the idea of surviving post-apocalypse, Fallout style, appeals to me more.

But in the case of Mr Prepper, it’s the journey, plagued by supply shortages and visits from snoopers, not the destination, that counts. And while I can’t see myself playing it through twice (though there is some speedrunning potential here) this slightly silly survival outing is worth locking yourself away for.