As we get closer to the release of Monster Hunter Rise which is finally coming to PC this January, a new video has been released featuring the title in 4K resolution. The video previews what hunters will look like with the upgraded graphics when wearing the Kamura Armor set. 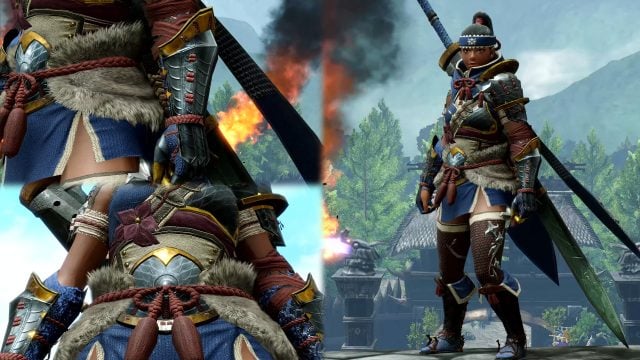 Kamura Armor is available in Rise, featuring a five-piece set including Kamura Head Scarf, Kamura Garb, Kamura Braces, Kamura Obi and Kamura Leggings. The set is iconic to Rise as it represents the Kamura Village, which acts as a hub for players in this latest entry.

It’s exciting to see how hunters will look in-game for the PC version, as Monster Hunter Rise gets 4K resolution, Ultrawide support and 60 FPS. Rise debuted on the Switch this year on March 26th, bringing the latest entry in the Monster Hunter main series to the hybrid gaming device, with the max performance of 1080p in docked mode at 30 FPS. It was then later revealed it was coming to PC in 2022, however not with cross-play or cross-progression.

The video shows every detail of the Kamura outfit, showing off textures up close, head to toe. I can’t wait to see how some of my favourite armors look on the PC version, especially the Rakna-Kadaki for hunters, as well as the Palico and Palamute armor sets.

This time players won’t need to worry about armor trade-off from the get-go when it comes to looking fashionable when Monster Hunter Rise releases on PC, as the game sets to include all updates and post-launch content on Day 1. Layered Armor didn’t come to the Switch until much later on, which you can apply for Buddies as well.

Previously it was revealed this year Monster Hunter Rise will be gaining its first major expansion called Sunbreak, coming to both Switch and PC in summer 2022. The expansion sets to add a brand new hub, the outpost Elgado, as well as a new monster Lunagaron.

As for when we’ll see more Sunbreak news it looks like we’ll have to wait until spring, as the director Suzuki shared on Twitter new reveals coming before the summer release. So far no exact release date has been given for Sunbreak just the release window.

Monster Hunter Rise is currently available on Switch and will be released for PC on January 12th 2022. Want to know what other titles are arriving next month? Check out our list here in Top 5 Upcoming RPGs Of January 2022.

For more news find it here in Expeditions Rome Gets New Trailer Featuring The Soundtrack and Why We May Not Get Any More NieR. Want to know what we’re excited about for 2022? Here’s a whole list of games to look forward to in RPG Games 2022: The Best And Most Anticipated.