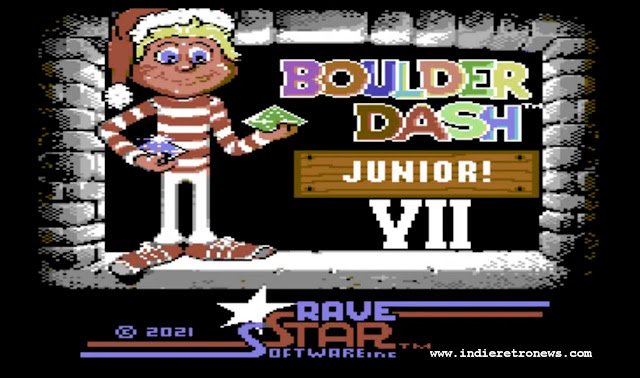 Another retro heads up for you all, as Saberman has just let us know through Facebook, that Raiders of the Lost Empire has released a Junior VII Christmas edition of First Star Software’s classic game ‘ Boulder Dash ‘. This game originally released in 1984 for more computers can we can think of with a multitude of clones and sequels, yet again see’s a younger version of Rockford collecting diamonds, while also trying not to dig himself under a boulder or straight into an enemy path!

Boulder Dash, is a video game released in 1984 by First Star Software for Atari 8-bit computers. There have been numerous versions and sequels in this series for numerous interactive platforms including: Apple II, MSX, ZX Spectrum, Commodore 64, ColecoVision, NES, BBC Micro, Acorn Electron, PC, Amstrad CPC, Amiga, Intellivision, Mac, Xbox 360 and many other platforms. In this fun little game however you must dig your way through the underground collecting Diamonds, while also avoiding bad moving things and being squashed by large heavy boulders. So yes very much like boulder dash, but featuring lots of cool new levels, a lovely Christmas loading screen, and a great soundtrack prior to the game itself!