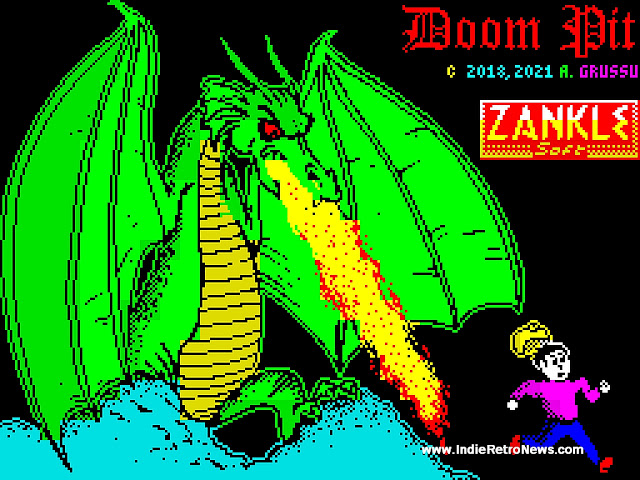 Ah Clive Townsend what a very talented developer he is, creator of the brilliant Saboteur! series of which many of us love still to this day. Sadly there was one game in his line up he never released for the speccy and that was Death Pit; a game advertised a lot by Durell, completed, but was never considered good enough for release even though some of the routines did end up in that game Saboteur. Still even though the development version was found in 2007, at least we have ‘ Doom Pit ‘ to enjoy. A new(ish) game as an official sequel for Clive Townsend’s previously unreleased Death Pit!

“Another re-release under the Zankle Soft label. This time it is the turn of DOOM PIT”

In DOOM PIT, you play as an archaeologist on an expedition aiming to retrieve artefacts left by an ancient and mysterious civilization. You carry a spade, which works as your primary weapon against the dangerous creatures that roam the excavation site. Thankfully the spade isn’t your only weapon as from level 2 you can buy a kick ass pump-action shotgun against even the hardest of foes. So yes if you were a fan of any of the Durell games you owe it to yourself to give DOOM PIT a try!